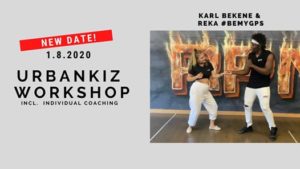 We’ve got some new tips and tricks to teach you!!!
Máme pre Vás nové tipy a triky!!!
Register!

🇧 An intensive OPEN LEVEL Urbankiz Workshop with Karl Bekene, one of the founders of the Rebirth Crew from Paris, France back in Bratislava

The class will focus on the foundation of kizomba/urbankiz techniques, teach you new steps and tricks originally created by Karl Bekene, now used by dancers all around the world. The last part of the workshop will be dedicated to individual coaching where Karl and Reka will be giving you feedback on your dancing skills, giving you tips for further improvement and answering your questions and working with each and one of you individually.

Karl Bekene Rebirth Style
One word – Creativity.
We can confidently name him as one of the most innovative urbankiz dancers in the current scene. This 24 year old dancer has never just been a kizomba dancer. His aim from the beginning of his jorney was to create new moves and tricks which are now used by dancers all around the world.
We asked him if he minds having his moves copied, and he said: ,, No, this is the proudest moment for me to see a random video of a dancer doing my move. It feels just wonderful!”
He has been dancing hip hop since he was born, his roots going back to Kongo and Ivory Coast definitely gave him that afro flow and an amazing musicality. Kizomba caught his attention in 2017. He just fell totally in love with it and worked very hard to get all the knowledge and improve. Karl attended workshops of Enah, Manu, he was a part of Val’r&Steffy’s team Afrokiziak which gave him the most. Daily trainings of techniques, musicality and hard work got him where he is now. He’s never stopped improving and still attends workshops and socials of other teachers in Paris- Khao Suay, Saida and worldwide.
Karl is a very humble easy-going and funny person, his classes are filled with practical information yet in a fun atmosphere. He has been teaching in Austria, Germany, Turkey, France and there is more to come.
His dream is to contribute the kizomba scene with new tricks, a fusion style and creative fresh moves. Karl is a founder of the Rebirth Crew and the Rebirth Nation. The concept is based on creativity and giving new life to urbankiz.